Energy storage devices require many components besides redox-active materials in order to function efficiently. Polymer binders, which bind together disparate particles in a cohesive electrode laminate, are among the most important of these inactive components. Lithium-based battery chemistries place especially high demands on their binders, including: wide-range voltage stability, easy processability, and the ability to swell with organic electrolytes while maintaining mechanical integrity. While poly(vinylene difluoride) or PVDF has been the industry-standard binder for most lithium-ion electrode designs until now, this polymer cannot fully meet the requirements of future systems e.g. majority-silicon anodes. We are currently developing and investigating a number of alternative polymer binders for next-generation battery chemistries.

As part of the Battery for Advanced Transportation Technologies (BATT) program of the U.S. Department of Energy, Gao Liu Research Lab pioneered  the development and application of a band gap-controlled conducting polymer for the advanced anode in lithium-ion battery applications.

Figure 1. Conductive polymer with dual functionality, as a conductor and binder, could keep both electric and mechanical integrity of the electrode during the battery cycles. 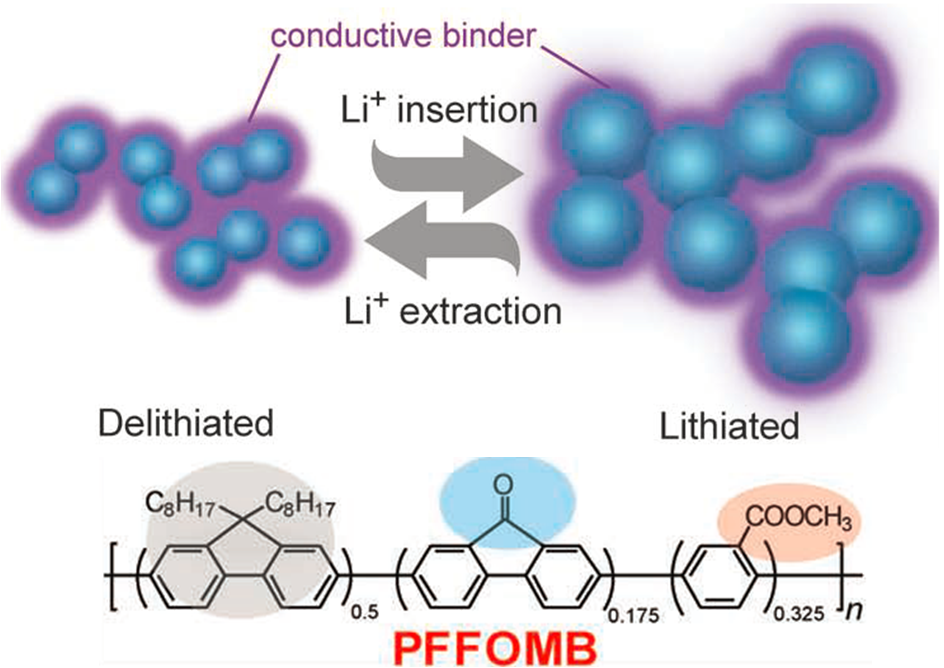 Figure 3. Schematics showing volume change of silicon nanoparticle covered by (a) PPy and (b) conventional polymeric binders, and the SEI layer during cycling.

There are many natural  polymeric materials that are used as adhesives or thickening agents. These materials are biodegradable and environmentally benign. We are evaluating these materials and developing feasible processes to use them as binders for advanced lithium-ion electrodes.

Table 1. The EAQ polymer is a low cost, water soluble, and environmental benign. EAQ, a certified biodegradable product, was initially produced by Eastman Chemical Company as an ingredient for cosmetics and personal care applications. It has abundant active hydroxyl groups on its surface that can potential bond to the active materials.

Figure 1. Galvanostatic charge discharge profiles of the natural graphite (a) and oxidized graphite (b) separately using Eastman AQTM 55s (EAQ) polymer and PVDF binder (weight ratio 9:1 graphite:binder,) between a cycling voltage of 3 V and 0.01 V when at C/10. Fourier transform infrared (FTIR) spectra of the (c) EAQ and PVDF polymer binder and (d) the natural graphite and the graphite oxidized by HNO3. 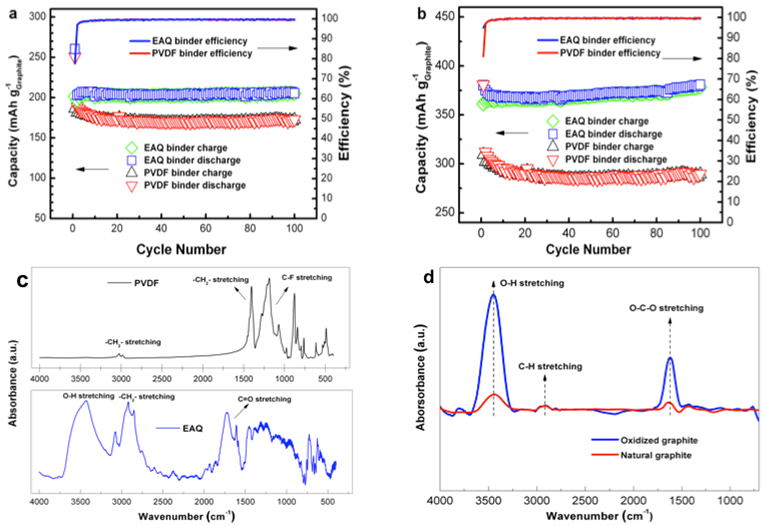 Sulfur species dissolution, precipitation and phase transformation during the charge and discharge process strongly affect the performance of lithium sulfur (Li–S) batteries. Interface properties between electrode and electrolyte play an important role in these batteries. In this work, four kinds of binders with different functionalities, which differs both in chemical and electrical properties, are employed to study how the interface properties affect the battery reaction mechanism. The phase transformation of sulfur species is studied in detail.

Remarkable differences are observed among sulfur cathodes with different binders. More solid-phase sulfur species precipitation is observed with binders that have carbonyl functional groups, like poly(9, 9-dioctylfluorene-co-fluorenone-co-methylbenzoic ester) (PFM) and poly(vinylpyrrolidone) (PVP), in both fully charged and discharged states. Also, the improved conductivity from introducing conductive binders greatly promotes sulfur species precipitation. These findings suggest that the contributions from functional groups affinity and binder conductivity lead to more sulfur transformation into the solid phase, so the shuttle effect can be greatly reduced, and a better cell performance can be obtained.

Figure 2. Voltage profile of the tenth cycle of PFM-S, PEDOT-S, PVP-S, and PVDF-S cathodes. Inset shows the detailed voltage curves at the beginning of the charge.

Rapid growth in the demands for scalable energy storage systems are continuously stimulating the scientist to develop advanced electrode materials with high energy density and reduce the cost of battery manufacturing. Lithium sulfur (Li-S) batteries have considered as a promising candidate in large-scale energy storage for electric vehicles and grid because of the huge abundant source and low cost of sulfur. Herein, a dissolvable ionic crosslinked polymer (DICP) was exploited as binder for Li-S batteries by crosslinking the polyacrylic acid (PAA) and polyethylenimine (PEI) through carboxy-amino ionic interaction. This interaction is pH-controlled, and therefore, the crosslinked binder network can readily dissociate in basic condition, providing a facile strategy to recycle the valuable electrode materials through a simple aqueous solution washing method. The recycled carbon/sulfur composite could be re-fabricated into sulfur cathodes which exhibit comparable capacity as that of fresh cathodes.The solvent employed in both the electrode preparation and the recycling processes is merely environmental-friendly distilled water. This study provides a new strategy for developing large scale batteries towards green chemistry and circular economy by the application of this robust binder. 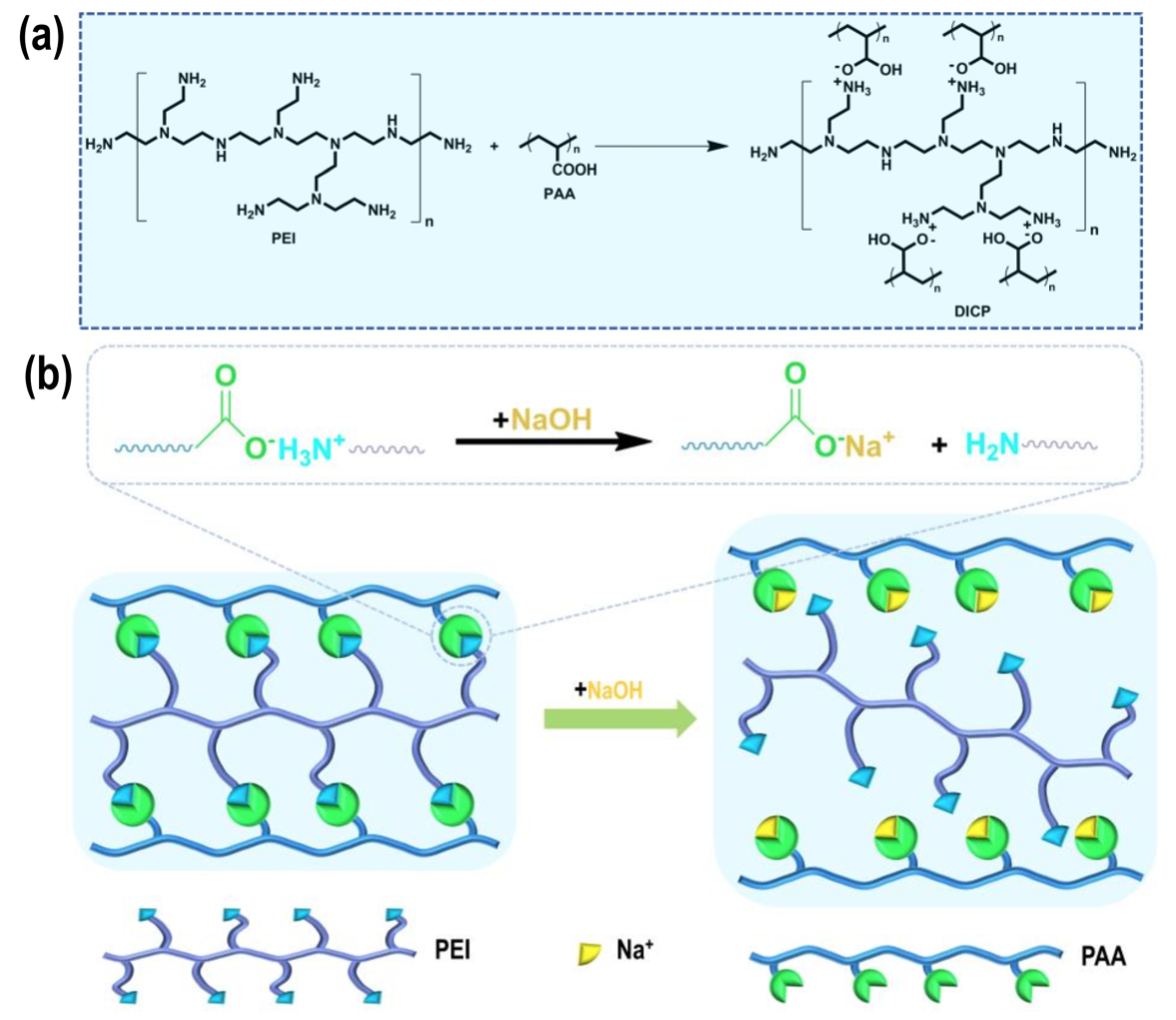 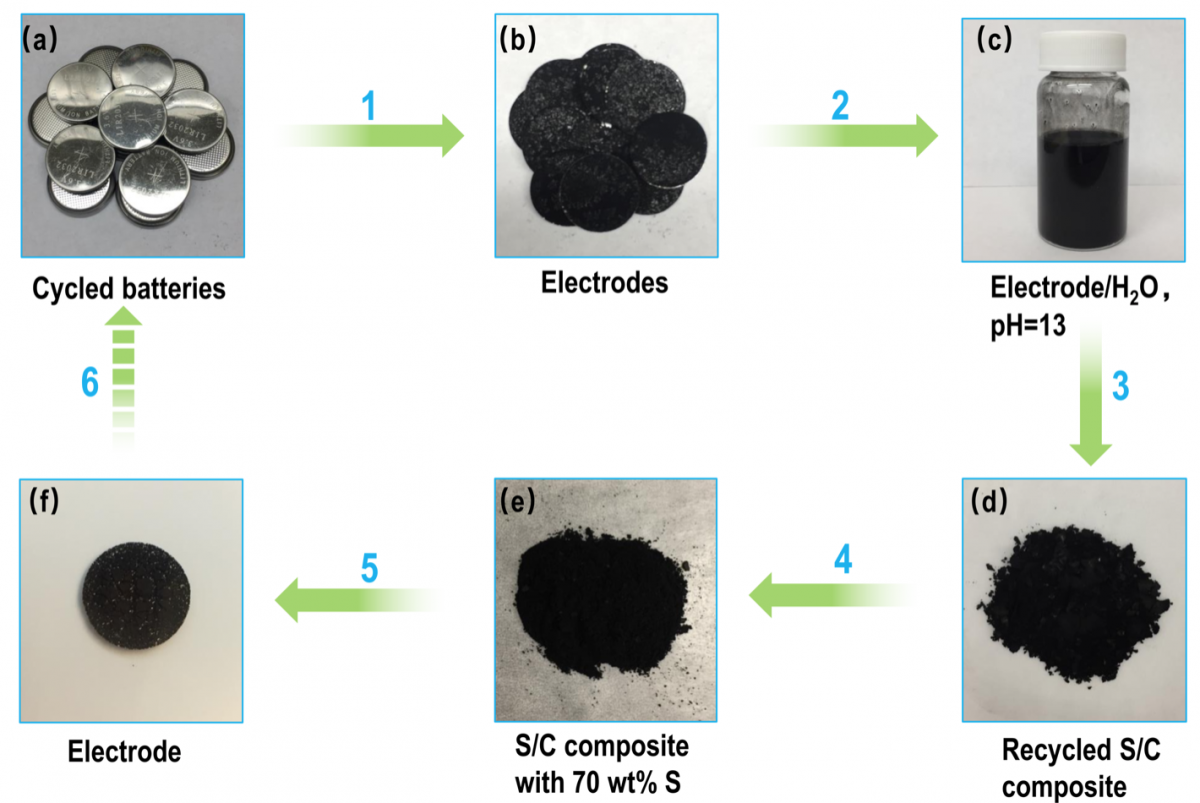